Financial markets will be focused on the upcoming release of the U.S Nonfarm payrolls job report on Friday and a host of global interest rate decisions. The United States economy is forecasted to have created 185,000 new jobs during the month of November, with the U.S unemployment rate ticking up slightly to 4.2 percent.

Reserve Bank of Australia board members come to a consensus on where to set the rates on Tuesday, with the current rate of interest set at 1.50 percent.

The market expectation is for the RBA to leave interest rates unchanged, with the economy still facing some headwinds. Traders watch interest rate changes closely as short-term interest rates are the primary factor in currency valuation. 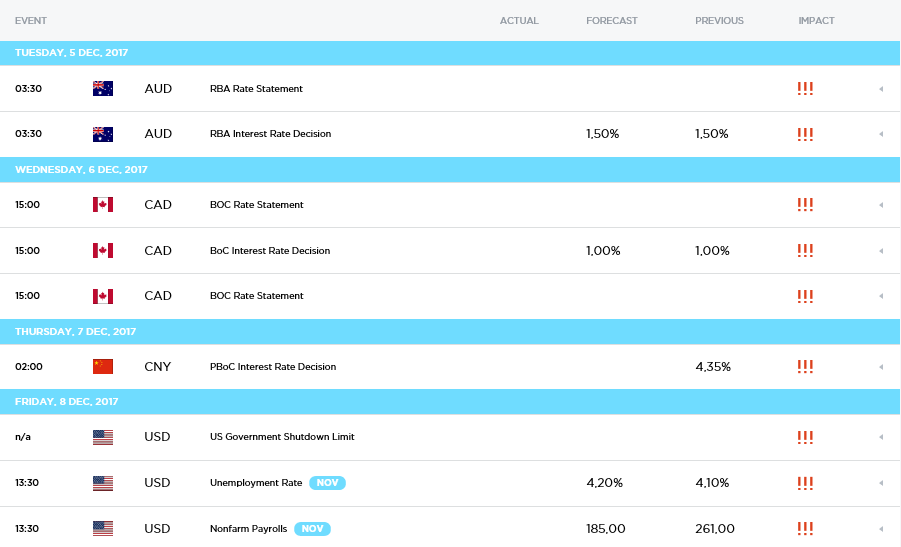 Bank of Canada governing council members come to a consensus on where to set the rate on Wednesday, with financial markets expecting the BOC to keep rates unchanged at 1 percent.

The People's Bank of China Interest Rate decision is announced on Thursday, with market participants expecting the PBOC to keep rates unchanged at 4.35 percent.

The Nonfarm Payrolls job report measures the change in the number of people employed during the previous month, excluding the farming industry. Job creation is the foremost indicator of consumer spending, which accounts for the majority of U.S economic activity.